A downloadable game for Windows

This variation of 'Antibug Squad' makes you your own enemy.

See how many lasers you can fire off.

Lasers in a Mirror Box.zip 19 MB

After some time with this interesting game, I realized that if you were to aim somewhere and turn on your autoclicker, you could theoretically get thousands of lasers on screen at once. Today, I revisited this game and did just that. I sent my ship to the side of the screen, aimed, and let loose the autoclicker. The lasers were plentiful. If I stared at it for too long, it would look like rain droplets. The relaxing music played on in the background, the number of lasers counted up steadily, and the only thing stopping me from falling asleep was the blue background that contrasted the red lasers. I knew very well that this wasn't how I was supposed to play the game, but this is how I played it. The framerate dropped to accommodate the sheer amount of lasers I had spouted out. Vertical columns of lasers populated the entire right half of the game's screen. It was a while before they started coming back at me, and by the time it was all over, the count rose up to 6224, and all I was told, other than "Game Over" and my score, was to press R to do it again.

Thank you for your review! It makes me so happy to know that, even though this game is easily exploitable, you had such a good time playing. 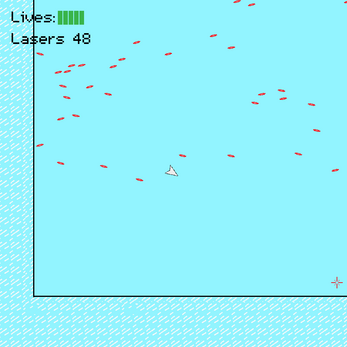