Help him bulk up and travel to the deepest depths.

Made as a part of:

That was fun! Level four is really hard.

Neat game! I actually struggled with it a bit more than I anticipated. Very cute though, though I think the pace is a little slow, especially for how much I had to reset. Moving is slow, and using the runes. I think using the runes could have a quicker and more punchy animation that seems very impactful, perhaps even with a bit of screen shake. These runes contain unfathomable ancient power!

It's really great especially with the improvements made after the jam feedback. I will miss the dynamic soundtrack but love the faster movement speed and the undo button :D

Lol great game!!! I love the detail to polishing, the cinematics and the sounds.

I cant figure out the second stage ;w;

If you'd like a hint you can try to pick up the middle blob first ;)

This is a really great idea for a puzzle game! I strongly suggest that you make this into an actual release.

This seems like a strong idea for a puzzle! A couple of suggestions:

1. Implement an undo move stack. On Level 4 it's easy to accidentally hit the last piece in the wrong place and have to start the entire level over again. By not having undo move, you're putting a ceiling on the complexity of puzzles you can reasonably ask the player to solve.

2. Movement is a bit slow. Is there a way to have the heaviness of movement feeling, but make it a tiny bit faster and more predictable? At the moment, it's easy to accidentally collect a blob piece because you released the movement direction you were holding down too late, and you're doing this because large levels are a pain to traverse at this speed.

3. Why can you only move over the hole when you're in the correct shape? It feels like there's a missed opportunity there for another movement mechanic.

Lastly, if you're not familiar with it, I'd encourage you to check out Stephen Lavelle's Puzzlescript, which allows for the rapid building/prototyping of grid-based puzzle games, where implementing and iterating on rulesets and puzzle layouts can be done very simply. Even if you're going to make something with fancier graphics, Puzzlescript is a terrific tool for designing levels and exploring mechanics. There's tonnes of great examples of puzzlescript games on itch under its tag.

Thank you for taking the time to write such detailed and helpful critique! For a post-jam version we should explore better movement options, and see if it's possible to implement an undo function. Andy is pretty handy with all that stuff so I'm guessing he would want to try it.

The reason you can only move over the hole when you're the correct shape is to limit movement on the entire playing field, we could have done that in different ways but it was basically for level design purposes.

Had some trouble running the game to run on firefox, kept saying "Could not compile vertex shader." So I played on Chrome.

Really cool game concept, visuals, music. I really liked how you introduced rotation, that was super unique and creates a lot more potential moves for the player.

Would be interesting if you made it so walking into a wall with oily caused him to split apart, and you can switch between multiple parts. Would add even more potential level designs.

I agree that oily feels a bit too slow, along with some of the scene transitions. Made level 4 a bit frustrating, though that would mostly be solved with an undo button.

Oh I'm sorry to hear that, we forgot to gametest on firefox. Glad it worked on chrome, initially it was tricky to get the audio working correctly on the web-version(so we had to do some workarounds).

A split-mechanic definitely sounds intriguing, maybe that's something we'll come back to if we do more work on this.

Undo-mechanic on the explore list as well, it would enhance the experience drastically.
Thanks so much for the feedback!

I couldn't get past level 4, so I had my girlfriend beat it for me (she's a scientist). It was great. Wish there were more puzzles but that's a good thing. My first instinct was that the movement was a bit too slow. The artwork is so freaking good and the overall presentation is spot on. Your logo at the beginning is great too. Fun and original 5/5 stars

Haha! Perfect having her around for this game. I struggled myself for quite a while to figure out how to complete level 4. I agree with the movement being a bit slow, maybe that's something we can fix in a post-jam version. We do need more levels!
Thank you so much for the kind words, glad you enjoyed it!

Hey, great little game! It looks really good, and the music is delightful. What engine/framework did you use?

Some constructive feedback: the controls felt slow. A few times I'd solved the puzzle in my head, and then it would take forever to bounce oily to where I wanted him to go (or I'd make a mistake and dread having to repeat the moves I already made). Speeding it up a little might improve the game-feel.

Thank you so much for this insightful feedback.
Andy built it in GameMaker2.
That's a great point about the movement, we had a lot of roadblocks on the way so we didn't have that much time left to get the feel just right. Maybe a undo feature would have been great too. We'll see if that's something we can add post-jam.

Glad you had fun! 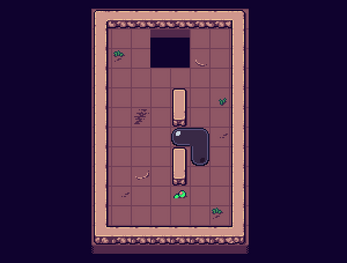 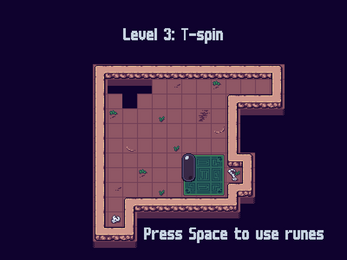